This exclusive preview of "Saint Sebastian" by Mattia Preti is the first in a series in which we will present and discuss significant Baroque paintings of the seventeenth and eighteenth centuries, with particular reference to the Italian and Maltese context.

Most of the paintings we will be discussing come from private collections and have never been exhibited before. We are delighted to have the opportunity to share them with you here on We Connect.

We will focus on the works of the followers of Caravaggio, Mattia Preti, Stefano Erardi, Francesco Zahra and Antoine Favray, amongst others.

An Introduction to Mattia Preti

Mattia Preti was born in the small town of Taverna in Calabria on the 24th February 1613, and was an Italian Baroque artist who worked in Italy and Malta.

Preti was called Il Cavalier Calabrese, which means the Calabrian Knight in Italian, after appointment as a Knight of the Order of St. John (Knights of Malta) in 1660.

Preti's early apprenticeship is said to have been with Giovanni Battista Caracciolo, who was a big follower of Caravaggio, which may account for his lifelong interest in the style of Caravaggio himself.

Preti joined his brother Gregorio, who was also a painter, before 1630, in Rome, where he became familiar with the techniques of Caravaggio and his school as well as with the artistic work of Guercino, Rubens, Guido Reni and Giovanni Lanfranco.

During most of 1653 to 1660, Preti worked in Naples, where he was influenced by the work of Luca Giordano, being another major painter of his time.

One of Preti's masterpieces was a series of large frescoes of the plague. These were painted on seven city gates, but have since been lost to the ravages of time. These depicted the Virgin or saints delivering people from the plague. Two sketches are in the Capodimonte Museum in Naples.

Preti also won a commission to supervise the construction, carving and gilding for the nave and transept of San Pietro a Maiella.

Having been made a Knight of Grace in the Order of St. John, he visited the headquarters of the order in Malta in 1659 and spent most of the remainder of his life there.

Preti transformed the interior of St. John's Co-Cathedral in Valletta with a large number of paintings on the life and martyrdom of St. John the Baptist (1661 to 1666).

In Malta, one can also find Preti’s works in private collections and in parish churches. His increased reputation led to more commissions from all over Europe.

Preti was fortunate to enjoy a long career with a lot of artistic work to his name. His paintings, representative of the late Baroque style, are held by many great museums, including various collections in Naples, Valletta and in his hometown of Taverna.

He passed away in Malta on the 3rd January 1699, and was laid to rest at St. John's Co-Cathedral. 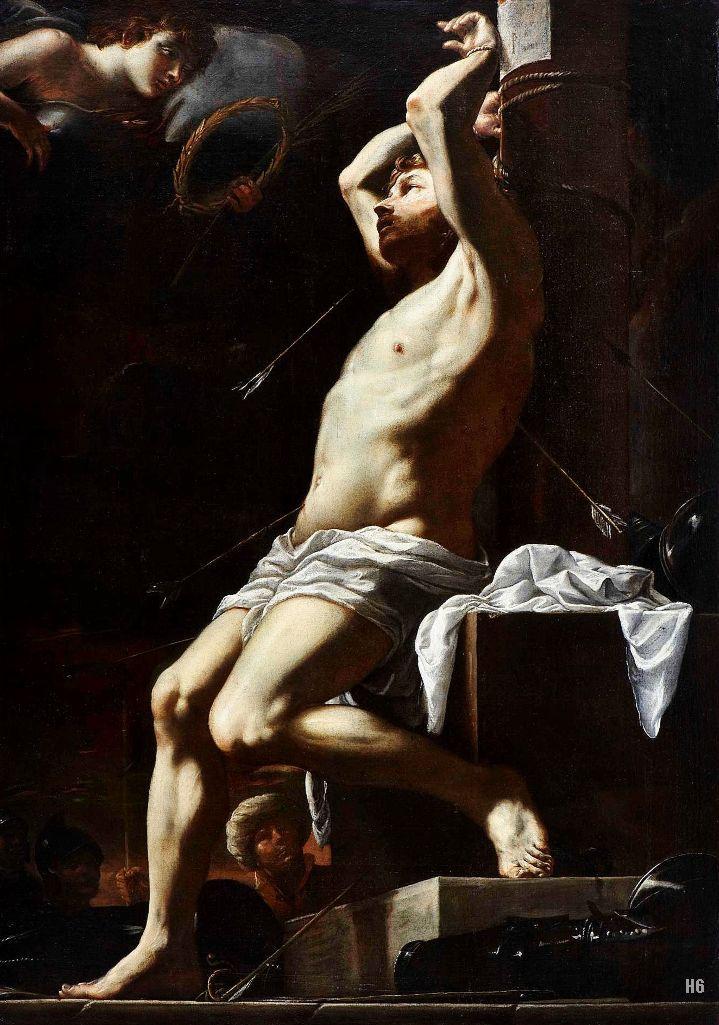 In our first Baroque art appreciation article, we shall review a marvellous work of art by Mattia Preti. "Saint Sebastian" was painted during or just after the plague that devastated Naples in 1656.

The Baroque alter painting representing Saint Sebastian is a masterpiece of Mattia Preti’s Neapolitan phase. It is a picture that captures the artist's grand manner naturalism, his lifelong interest in strong tonal qualities and his monumental rendering of figurative forms.

Unfortunately little is known of its early history, but it was clearly depicted for a religious context. It was at some stage removed from its original context and taken into a private collection. In terms of style it shows Preti’s interest in the work of the followers of Caravaggio.

Saint Sebastian was one of the major intermediary saints invoked in times of pestilence (plague). His popularity ranked him as one of the principal saints, whose devotion was spread throughout the Roman Catholic world.

The painting shows the saint tied to a tree whilst he is enduring the suffering of the first attempt at this martyrdom. He turns towards the shaft of light, and an angel who carries the symbols of martyrdom.

Mattia Preti painted this subject on a number of occasions. Comparative reference can be made to the two large paintings preserved at the Museo di Capodimonte in Naples and the Church of Sarria Floriana respectively.

The painting has recently resurfaced in a Spanish private collection, and is now in a local collection.

Its restoration and publication is a most welcome addition to the study of the artist’s oeuvre, and of Baroque art in general.

Maria Theresa of Habsburg - a Sovereign of Great Power and Resilience