Giuseppe Calì is a Maltese artist, born in Valletta on the 14th August 1846, and is originally of Neapolitan descent. Calì was one of the most prolific artists on the island during the late nineteenth and early twentieth century, as he executed his works with a precision that was admirable for the haste with which he worked.

After studying for two years at the Academia di Belle Arti in Naples under the direction of Giuseppe Mancinelli (1812-1875), Calì came back to Malta where he is thought to have spent the rest of his life painting and teaching art.

The strict academism of Manicinelli does not seem to have been his greatest source of influence, as artists like Domenico Morelli (1826-1910) and Filippo Palizzi (1818-1890) left a more lasting influence on the artist’s style of painting.

In Malta, Giuseppe Calì had very little competition from other local artists, as his unique way of using both elements of Realism and Romanticism in his works, pleased all kinds of patrons at the time.

The four oil on canvas paintings found in a private collection, depicting the Allegory of the Four Elements, are examples of some of his finer works. Representing the four elements of fire, water, air and earth, these easel paintings seem to have been produced towards the end of his career.

Giuseppe Calì did not use classical gods and goddesses in order to bring the elements to life, as was customary in the sixteenth century. Instead, he chose to use putti (a representation of a naked child, especially a cherub or a cupid) with diverse attributes to personify the elements.

In these works air is represented by birds, earth by flowers, fire by smoke and water by the sea. This must have seemed more appropriate to the artist, making these works easily relatable and therefore more appealing to the public. 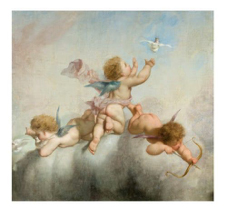 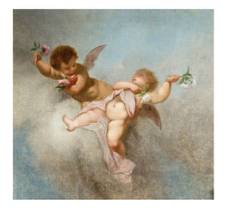 Putti in art date back to Greek and Roman antiquity, but they were also commonly found in the Renaissance and Baroque period. The strong Baroque influence in Malta is what largely spread the use of such putti in local art. This influence was then carried down throughout the centuries, as can be seen clearly in these works by Giuseppe Calì.

In Hellenistic times Eros, the god of love, was represented as a winged and child-like being. This representation was then retained in the Middle Ages and during the Renaissance and Baroque period, where putti were incorporated into paintings of religious themes as well as profane subjects.

The resemblance between these childlike representations found in Hellenistic times and the ones depicted in the Renaissance and Baroque period were surprisingly similar. Little has changed in the mode of representing these putti, as even Giuseppe Calì took up a very recurrent method of painting these winged infants.

The works representing the Allegory of the Four Elements are compositionally very straight-forward, Giuseppe Calì places two or three putti at the centre of the picture space as they frolic amongst some clouds.

Fire is clearly depicted as a flame with smoke which is held high by the putto on the right-hand side of the painting. Calì then emphasises the importance of fire in the work by giving the space between the clouds on the lower part of the canvas a reddish hue. This cannot be seen in the representations of air and earth. In all four paintings, Giuseppe Calì shows his virtuosity in the poses of the putti, which demonstrate a great sense of movement and foreshortening. 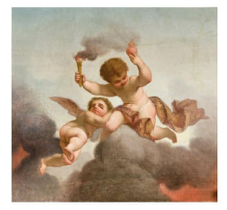 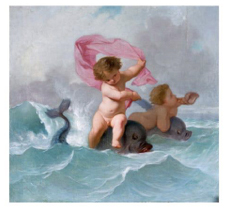 At first glance, the painting dedicated to the element of water can seem rather different to the other three works. This is because Calì chose to set these two putti riding two dolphins in open sea. Calì could have represented the element of water by setting two putti on rain clouds instead, which would have tied in more with the other three paintings.

Apart from this, the artist depicted one of the putti, holding a pink cloth which blows in the wind. This is particularly eye catching when compared to the other three paintings that have a more subdued colour scheme. Even when taking these aspects into consideration, one can see that Calì was still keeping the other works in mind. This is seen in the way Calì placed his two putti in the middle of the canvas, mimicking the movements of the other putti in the series.

The series of four paintings representing the elements were executed in a rather particular way, especially when compared to some of his other works. Here, Giuseppe Calì applied a very thin layer of pigment, giving the works a large degree of transparency.

What is even more surprising is the fact that he left even his drawing visible, as several pencil marks can clearly be seen in all the four works.

Because pencil was left showing and the paint was very thinly applied, it is believed that this series could have been left unfinished. It is more plausible that these works were carried out by Calì in the later phase of his career and he deliberately chose to give these works a fresher execution.

These four paintings show Calì’s versatility, as he managed to incorporate his Romantic influences, even within more traditional subject matters. Giuseppe Calì also succeeded in showing his thought process and true intentions by treating these works with a fresh and innovative approach.

Giuseppe Calì’s private paintings with a romantic theme were fairly abundant, as were his diverse allegories. Through these private works, Calì was given the opportunity to truly develop himself as an artist.

With such paintings he was not tied down to the preferences of the general public, but only needed to reach an agreement with the particular patron concerned. He therefore took up themes which were not always common to the Maltese artistic scene, as can be seen in particular with his romantic subjects such as these works representing the Allegory of the Four Elements.

With such works Giuseppe Calì could experiment more freely than with his church paintings, portraits and even his landscapes and seascapes. The latter were often subjected to certain formulated methods of representation, which Calì often did not feel comfortable breaking.

The very nature of his allegorical paintings with a Romantic theme gave Calì greater liberty in the mode of depiction, in their execution and the emotions they transmit.